The Chicago Sun-Times and its sister newspapers in the suburbs May 30 trashed their reputation for engaging and lively content by firing almost all their photographers. The company would not provide a count of the lost jobs, but about 28 people were affected. 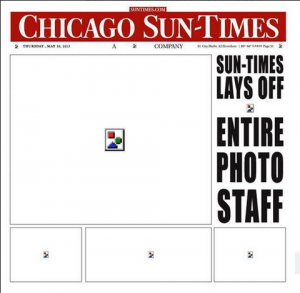 The loss of such an important part of the editorial staff is unprecedented for an operation of the Sun-Times’ size. Most of those laid off were members of the Chicago Newspaper Guild, but the cuts included photographers at papers without union representation.

The Guild will fight for its members’ jobs and believes the cuts are illegal. Craig Rosenbaum, executive director of the Guild, said members are discussing a range of responses, including a lawsuit and job actions. “We think this is a terrible move for the paper and the community,” he said. Layoff victims included photographer and photo editor Ernie Torres, with more than 40 years of service at the Sun-Times, and Pulitzer Prize-winner John White, who started at the paper in 1978. Other veterans who were released included Brian Jackson, Al Podgorski, Tom Cruze and Scott Stewart.

Sun-Times photographers who retained positions in roles not yet explained were veteran Rich Hein and a recent hire, Jessica Koscielniak. In addition, the job of a photo editor at Pioneer Press was spared.

Jim Kirk, Sun-Times editor-in-chief, said the layoffs were necessary as part of the company’s transition to digital content. In a meeting with staffers in the Sun-Times newsroom, Kirk said reporters will be trained to take pictures using iPhones and other devices. He also said the papers will use freelance photographers.

Kirk did not address cost savings from the move. But the layoffs are part of a series of company actions to outsource and remove content from its publications and to change working conditions for Guild members. All of those initiatives have come as the union is attempting to negotiate a new contract with the company.

The layoffs overwhelmed recent good news that came to the Guild. It involved the transfer of the Sun-Times’ three business reporters to nonunion jobs as part of a business magazine called Grid, which is circulated in some Sunday editions.

The Guild filed a charge of an unfair labor practice over the transfers. At contract negotiations on May 22, company representatives agreed not to contest the matter and moved the three reporters back to union jobs at the Sun-Times. The settlement affected David Roeder, who is treasurer of the Guild and a member of the contract bargaining committee, and Sandra Guy and Francine Knowles.

The settlement came during a bargaining session that for the first time gave indications of progress. The talks are continuing under the auspices of a federal mediator.

by admin Posted on May 30, 2013
This entry was posted in Guild News. Bookmark the permalink.