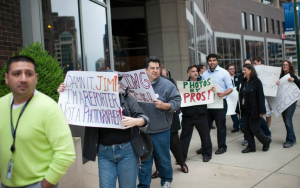 We members of the Chicago Newspaper Guild are hoarse, tired and absolutely thrilled.
We are overjoyed at the turnout and the media coverage for our rally Thursday, June 6, for the laid off photographers of the Chicago Sun-Times and its sister papers in the suburbs. Please see the photo gallery of this event – the password you’ll need is chicagonewspaperguild.

But we are grateful above all else. Our march became a rallying point for journalistic integrity and depth in this city and there are many to thank for making it a success.

Thank you to our members, many of them fearful about their own jobs and possible retaliation, for making signs, attending, marching and chanting in solidarity.
Thank you to members and leaders of other unions, especially to Karen Lewis, president of the Chicago Teachers Union, and to Robert Reiter Jr., secretary-treasurer of the Chicago Federation of Labor, for lending invaluable aid and firing up the crowd. We offer shoutouts to Teamsters Local 458, the National Association of Letter Carriers, the International Brotherhood of Electrical Workers, the American Federation of Television and Radio Artists and the Screen Actors Guild. The support was awesome.

Thank you to laid off photographers who were not represented by the Guild for marching with us. When it comes to fighting for decent treatment and equitable pay, we are all together.

Thank you to employees of other media, such as the Chicago Tribune, ABC-7 and DNAInfo, for joining our rally.

Thank you to the many motorists who honked their support as they drove up Orleans.
Now, stick with us, everyone. The pressure is just starting.
We want the photographers’ jobs restored.

We want Sun-Times Media to negotiate a fair contract with us, treating the Guild as a partner and not as an enemy.

We say “No more” to the cutbacks our industry has endured, divestitures that have put a heavy corporate hand over attempts to report news fully and fairly. Note that Chicago Sun-Times has been silent about the photographer layoffs, an event that has made international news and, sadly for those of us who love it, made the paper a punch line. The Guild, and not management, is speaking for the soul of all Sun-Times papers and for the cause of journalism.

Join us as we keep up the pressure. Watch for details on a rally planned at the Thompson Center at noon on Thursday, June 13.
AND WATCH THIS WEBSITE.

by admin Posted on June 7, 2013
This entry was posted in Guild News, solidarity. Bookmark the permalink.