In August of 1983, Bob Rockafield hired me to be a reporter for the Park Ridge Advocate, one of the weekly newspapers of Pioneer Press.

When I walked into the newsroom for the first time, I had been a reporter for just over eight years, had worked for two small dailies in Canada and was deeply grateful, after two and a half years away from the business, to sit back down in front of a typewriter and pick up a phone again, ready to talk to people, find out things and write stories so that readers could know what was going on in their town.

I used a  land line phone — a dial phone, if I recall correctly — and a manual typewriter. When I wrote my stories for my now long-gone editor,  I used two carbons between three sheets of paper,  so  I, my editor, and the back shop would each have a copy. When I cut and pasted paragraphs I cut them with scissors and pasted them with glue, not pixels. I had to slow my daily-honed rhythms down to a slower pace, but that didn’t take long. Over the years, in fact, I think that the slower pace allowed me time to become a better reporter and writer.

In short, all was largely for me as it had been at my two previous papers. And as far as I was concerned, that was a good thing.  I’d fallen into my profession by accident, but I loved it. What mattered was that I was a reporter again. I had colleagues that I brainstormed, worked and joked with, swore at, borrowed cigarettes from (hey, it was long ago and I’ve been clean for years) and went out to bars with (ditto.) I was part of a raucous newsroom family, a team pulling more or less in the same direction, with creativity and drive and quirky excellence.

And here at Pioneer I’ve stayed; happily, for the most part. Thirty years, five separate papers, nine different editors, seven or so different owners (including one, Conrad Black, who gutted us of millions of dollars and got, relatively speaking, a slap on the wrist and at least one book contract for it); multiple labor contract cycles, at least four of them as a member of the negotiating team. More than a handful of awards to my name, too, although it’s been at least 15 years since I competed for such things.

I’m still here, but the world has changed. I once more report on a daily, or near daily rhythm. The dial phone, the push-button phones that followed it, indeed the land line itself, have all become things of the past. I’ll wager that few of my current newsroom colleagues could slip two pieces of carbon paper between three sheets of cheap typing paper and maneuver them successfully onto a manual typewriter’s platen. They certainly couldn’t cut and paste a story with my long-vanished origami-and-blunt-scissors flair (nor would they want to, I’ll warrant.)

I have a laptop computer and a recently issued iPad; I have a smartphone. I have wi-fi. I have a home office, one I’ve often preferred writing from, depending on who was in charge at Pioneer Galactic Headquarters.

But I have no newsroom.

My latest set of owners decreed last December that all of their suburban properties would shut their physical doors this year. Those properties —  Pioneer’s weekly newspapers, some small outlying dailies — would continue publishing, but there was no longer any need for the physical plants, they said. The sole remaining physical plant would be in downtown Chicago, home of the Chicago Sun Times newspaper. Our editors would all report down there, whether their paper was in suburban Chicago, in Joliet, Waukegan or Gary, Indiana. Our loyal, hard-working and poorly paid editorial assistants were also dragooned downtown, or forced out of their jobs. The reporters, the photographers? We were cut loose, to report “from the field” or, if we were lucky to be assigned a beat close to our home, from a home office.

I’ve weathered various ups and downs at my job over three decades; old owners, new owners, foolish decisions, maddening attitudes, incomprehensible policies and mandates, far too many of them caused by, and reflective of, an industry busy trying to tear its own throat out. (Somewhere out there, there’s a Gahan Wilson cartoon: a couple of detectives standing in a restaurant kitchen, horrified chefs looking on as the two shake their heads over an arm sticking out of a meat grinder, its fingers still gripping the grinder’s handle. On the floor below, a great deal of freshly ground meat.  “Most determined case of suicide I’ve ever seen.” But I digress.)

In the weeks leading up to the closure of Pioneer’s last office, a lot of things got thrown out. There simply is no room down at the Sun-Times for decades of bound volumes from almost three dozen weekly newspapers (some of which no longer publish). Nor is there room for decades of local, regional and national award plaques, given to decades of gifted editors, reporters, photographers, designers and even dedicated advertising folks.  No room, and less interest.

At Pioneer, some of those bound volumes found their way to local historical societies. Some folks were able to retrieve their awards (my own hang on my wall, mute reminders that I once had more fire in my belly than I now have.) But most of them? 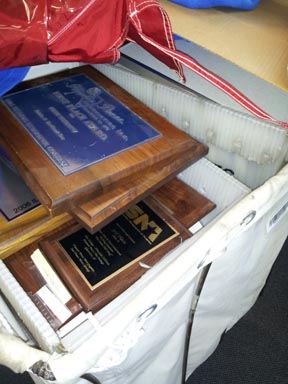 I’ll go on. I’m weary, and sorry, and sad — disgusted, too. But I’ll go on, because my colleagues are still out there working their hearts out. Our bosses might not care, but we do.

by timcampbell Posted on April 7, 2013
This entry was posted in Uncategorized. Bookmark the permalink.

5 Responses to Look Back, Move Forward